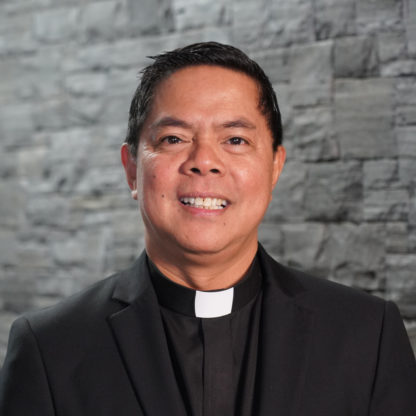 Fr. Rowel Jose, fondly called Fr. Arjay, is the youngest of 11 children. He entered Holy Rosary Minor Seminary in the Philippines, and graduated with a Bachelor of Arts, with a Major in Philosophy & Minor in Religious Education. Fr. Arjay then went on to Holy Rosary Major Seminary and completed his Bachelor of Sacred Theology. Fr. Arjay was ordained a priest on June 10, 1995 by the Most Rev. Benjamin J. Almoneda, DD, the second bishop of the Diocese of Daet, Camarines Norte in the Philippines. He also studied Liturgy in San Beda University, and Human Development Psychology at De La Salle University.

Following the Lord is not easy but Fr. Arjay relies on God’s mercy and love. He chose his priestly ordination motto as his guiding principle to serve God and His people: “You did not choose me, but I chose you…” (John 15:16).

With God as his protector, Jesus Christ as his Master and Lord, Mary as his loving Mother, Fr. Arjay is willing to be of help to the parishioners and asking our patron St. Peter the Apostle to intercede for us as we pray: Sancte Petre, ora pro nobis!